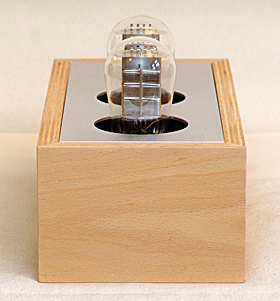 The 300B is an unusual single-ended tube amp with 300B power tubes. The amp uses two tubes in parallel, which makes it easy to produce 30 Watts of clean and wonderful single-ended 300B power! The input stage also relies on two paralleled triodes (ECC88), which drive the 300Bs through a step-up transformer. All this makes for a very simple and direct signal path with no capacitors. The 300B tubes can be replaced with stronger tubes, such as the 32B. In this case, this single-ended amplifier can deliver more than 40 Watts!

Description of the Amplifier

The aim in building this amplifier was to design a single-ended amplifier which has enough power to drive “normal” loudspeakers with sensitivities of 90 dB/W/m or less. I decided this design should work with down-to-earth voltages lower than 400 V and it should use easily available tubes. The concept of this amplifier is based on proven designs by Electra Print and Andrea Ciuffoli: The power stage uses two 300B tubes in parallel to produce enough power to drive “normal” speakers, while the venerable sonics and qualities of the 300B are retained. The input and driver stage (Based on a ECC88 / 6922 / 6DJ8 tube) is coupled to the power stage through a high-quality transformer. For simplicity and for best sondic results, no feedback loops exist in the amplifier. Only triode tubes are used throughout the entire amplifier. The power tubes are operated in fixed bias mode. Their operating point can therefore easiliy be adjusted to accomodate for non-matched tube pairs. This also allows the use of other power tubes, such as the AVVT 302B / 32B or the Emission Labs XLS tubes, which provide even more power than the standard 300B (e.g. more than 40 Watt with the 32B). This amp sounds very nice and clean. Yet, it has enough power to drive speakers like the ScanSpeakers without difficulties. With standard 300B tubes, the output power is 30 W. 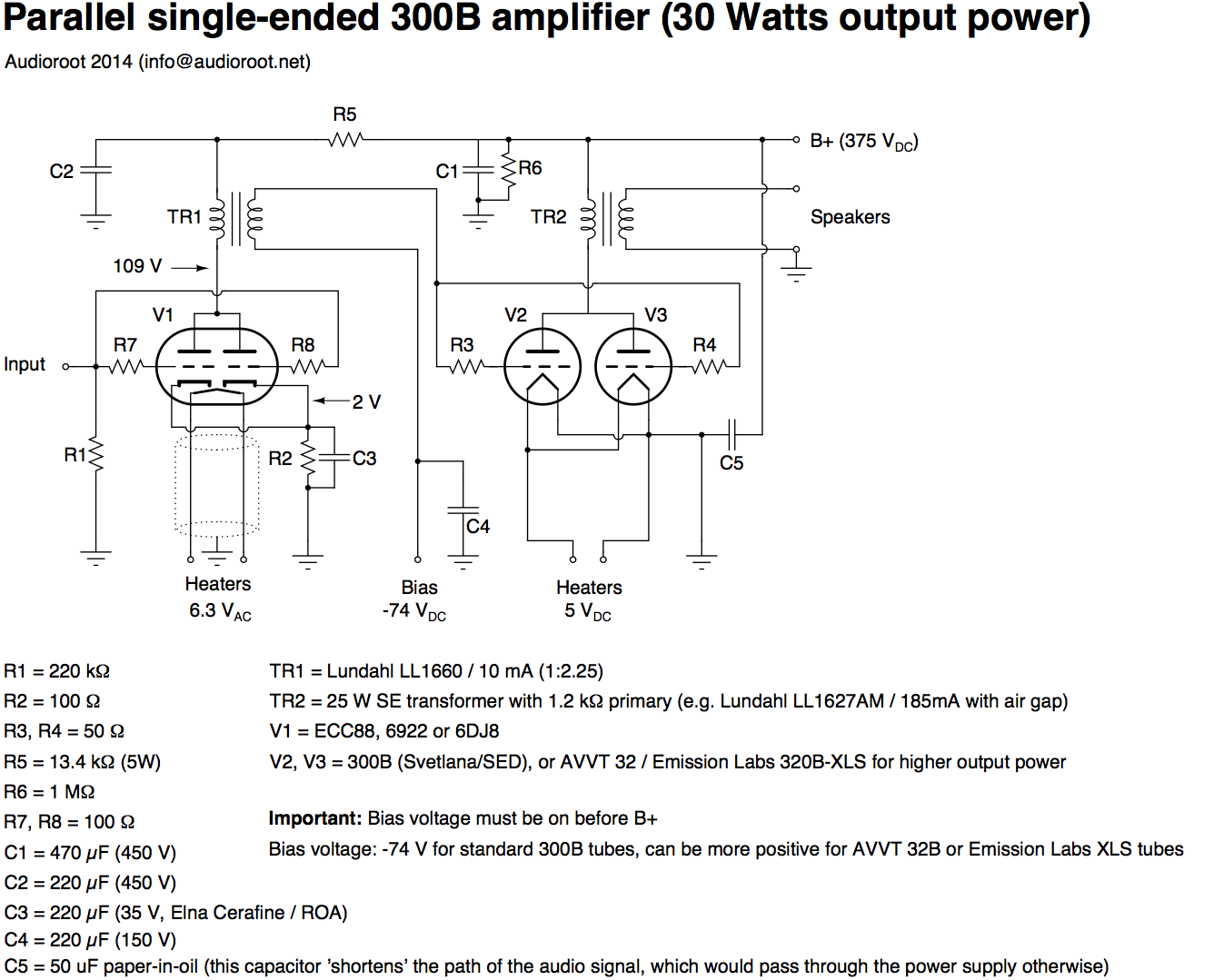 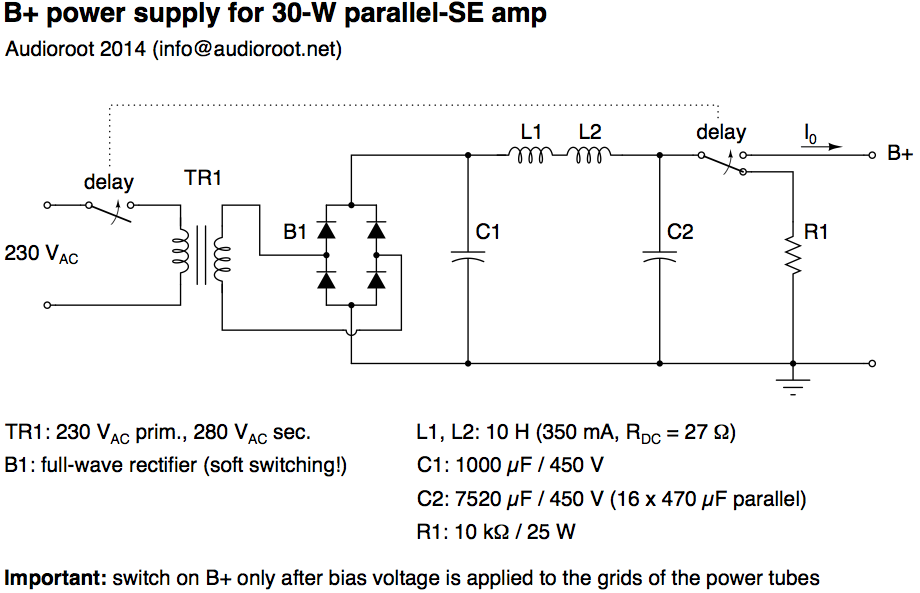 The B+ power supply design is, in principle, nothing fancy. In contrast to “traditional” designs, however, it uses two cascaded LC filters with massive inductors (L) and capacitors (C) to produce an extremely clean the B+ voltage. The energy stored in the last capacitor stage alone is enough to play music for almost half a minute without getting power from the mains (or to lift an average person by 1 metre into the air)! The rectifier is solid state (i.e. not a vacuum tube, which are not capable to deliver enough current for this amp). The rectifier consists of four high-speed and soft-switching diodes to avoid the negative sonic effects of “normal” solid-state rectifiers.

For the filaments, regulated DC supplies are used.  The DC voltage ramps up slowly after turning on the power switch. This increases tube life by avoiding excessive currents through the filaments when they are still cold.

Following Andrea Ciuffoli’s design, I started with a 5842 (417A) tube in the input/driver stage. To make a long story short: this tube sounded thin and harsh in this design. I don’t think that this is a problem with my specific design, as it is very similar to that by Andrea. Maybe Andrea has a different taste concerning the sound of his designs. So, I was looking for another input triode which provides the following characteristics: A relatively high cathode-current rating. A cathode current of Ik=20 mA running through the tube is needed to make sure the grid current for the driver tubes does not affect the performance of the driver stage (see also the VT52.com site for an explanation of this issue; and don’t forget we have an additional transformer between the driver and the output tube, which further increases the minmum value of Ik by a factor of 2.25). A relatively high gain to assure a good input sensitivity. The gain factor of the 5845 / 417A is µ=43, which, in combination with Ik=20 mA, is tough to beat. I had some beautiful ECC33 tubes roaming around my table when I experimented with the input tube. The gain of this tube is µ=33 and it can easily handle the current, even more so if the two triode systems of this double triode are operated in parallel (note that the ECC33 is often but wrongly used as an equivalent to the 6SN7, but the 6SN7 has lower gain, and probably differs in other aspects, too). So I gave the ECC33 tubes a try, and they worked much better than the 5842 / 417A. After a while, however, I got annoyed by the overly sweet and somewhat mellow sound resulting from the ECC33. In the search for another candidate I flipped open my tube handbook. The choice was obvious: the ECC88 (6DJ8) is the way to go! I had some very good experience with this tube in the output stage of my DAC, and if the two triode systems are operated in parallel (again…), the ECC88 can easily drive the 300Bs through the transformer. This choice was further supported by the fact that I have a box full of high-quality, new-old-stock E88CC tubes made by Simens and Philips. I put a pair of the Siemens tubes in, and there they stayed… the sound is more dynamic and open, the bass is much more detailed and has more control than with the ECC33. A further advantage of the ECC88 is that good-quality tubes (both new-old-stock and newly manufactured ones) are easily available at down-to-earth prices, which is not at all the case for the ECC33. Power stage So far, I’ve tried the following power tubes in this amp, with different results (in alphabetical order):

So, who’s the winner? It depends. The AVVT / Emission Labs tube is expensive, but it’s construction can compete with a bottle of beer, sounds great and has enough power for a trance party. The Electro Harmnoix is the least expensive and sound ok. The Fullmusic is for those who crave for (overly) sweet sound. The Svetlana (my personal favourite) isn’t cheap but in the 300B PSE amp it sounds really good.